Enema History in the Mayan Culture 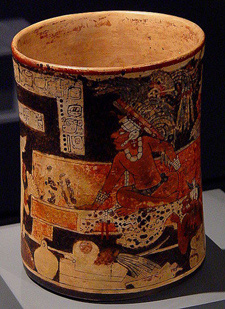 In 2010 I visited Guatemala in order to responsibly cultivate my relationship with the fairly traded enema coffee that I sell for my colon cleanse clients to use for their coffee enemas at home.

In addition to visiting a coffee farm on this two-week trip, I also decided to go to the jungle to see the Mayan ruins of Tikal and Aguateca in Guatemala’s northern department of Petén.

To my delight, Bernie, the owner of the hotel where we stayed in Petén and also our guide to the remote ruins of Aguateca for an entire day, happens to be an expert on the historical use of the enema and on the mythology of the enema within the civilizations of Mesoamerica. As we spent the day trekking through the jungle, listening to the call of howler monkeys, admiring the beauty of Ceiba trees, and learning about the Mayan ruins at Aguateca, Bernie and I also talked about enemas.

Not only is Bernie familiar with the relationship that the Mayan civilization had with enemas, but he also knew exactly where to look to find the historical documentation. I was amazed.

As we opened the website www.MayaVase.com, I imagined we would look at a couple pictures of broken pottery, lacking in any significant modern interest. This was not the case. Rather, I found a world and a people previously unknown to me, including a striking written history of enema usage and enema mythology.

(We are lucky to have documentation of this Mayan art, as the illegal exportation of Mayan cultural artifacts is sadly a very big business.) 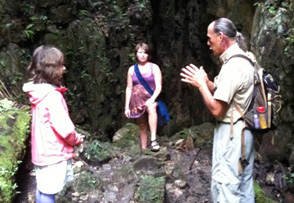 What makes the Mayan historical record so striking to me?

Firstly, of all the people of the pre-Columbian New World, only the ancient Maya had a complete script: they could write down anything they wanted to, in their own language.

Secondly, it has only been since the 1950s that this ancient language has begun to be deciphered by Western scholars. As Michael D. Coe, author of Breaking the Maya Code, writes: “I believe that this decipherment is one of the most exciting intellectual adventures of our age, on par with the exploration of space and the discovery of the genetic code.”

Thirdly, we have learned that the enema was a central element in the spiritual and mythological beliefs of various cultures of Mesoamerica – an enema is even a part of the creation story of the Classic Quiché Kingdom in Guatemala’s western highlands, as recorded in The Popol Voh.

That night, after we spent the day hiking at Aguateca, Bernie explained what he could of the ancient Quiché language he could read. While I listened, I also filmed the account with my iPhone. On this website and on YouTube.com, I have chosen to highlight and discuss a handful of the more detailed and interesting images that contain the written symbol for enema.

1. Enema History: Glyph of Enema – This video captures a photo of a simple and beautiful pot which clearly displays an enema glyph (symbol).

2. Enema History: Simple Enema – This video captures a photo of a ceramic bowl depicting two men taking an enema, likely for ritualistic purposes. This bowl can be seen at the Fine Arts Museum of San Francisco.

3. Enema History: Enema Plate – This video captures a photo of a rare plate depicting a common person being given an enema. There are also singers present in this enema scene.

4. Enema History: Ceremonial Mayan Ritual – This video captures a photo of a vase depicting a woman gesturing as two men use bowls to fill enemas. This is likely a ceremonial ritual intended make a connection to the upper world – the world of the dead – to seek wisdom from the ancestors.

5. Enema History: Mayan Creation Story – This video captures a photo of a vase depicting the mythical story of the baby jaguar.

6. Enema History: Mayan Creation Story 2 – This video captures a photo of a polychrome vase depicting a mythological enema ritual performed by the hero twins. This represents the beginning of creation. It highlights the use of the water lily as a traditional part of the enema solution, as well as the significance of the enema in the Mayan creation story.

Among the pages of www.MayaVase.com, there are currently photos of 39 Mesoamerican artifacts (vases, plates, and bowls) that display the enema symbol. View these enema-related photos

Look for more history of the enema on these pages over the months and years to come! 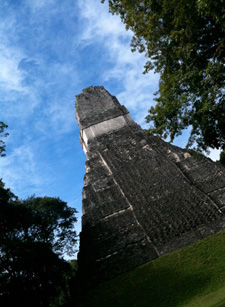 ▲
RETURN TO TOP OF PAGE 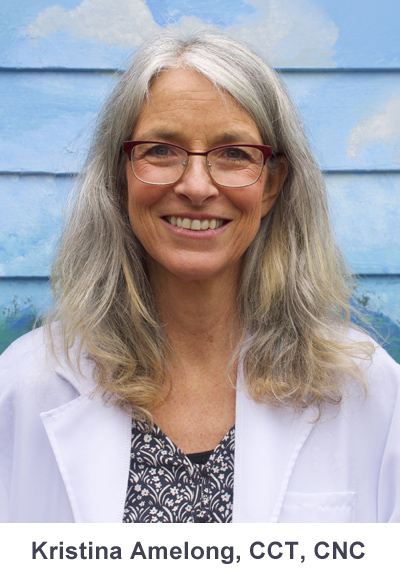 Sign up for our WELLNESS NEWSLETTER and receive SALE COUPONS!

As a subscriber, you will receive a special coupon code with each newsletter for use on our ONLINE STORE. Simply enter the coupon code into your shopping cart during the announced sale dates to receive a discount of 15% or more on your entire order!

The Enema Is In: A Comic Strip
Buy Enema Supplies
BUY ENEMA EQUIPMENT AT:
OptimalHealthNetwork.com

DISCLAIMER: This website and any linked material are presented for informational purposes only and are not a substitute for medical advice, diagnosis, or prescribing from a licensed healthcare professional. Nothing contained in or accessible from this website should be considered a medical diagnosis, claim of cure, legal warranty, or guarantee of results to be achieved. When you purchase any product from Optimal Health Network, Inc., we must presume that it is for personal use under the direct supervision of your medical doctor. Never disregard medical advice or delay in seeking it because of something you have read on this website or in any linked material. Consult with a licensed healthcare professional before altering or discontinuing any current medications, treatment, or care, or starting any diet, exercise, cleansing, or supplementation program, or if you have or suspect you might have a health condition that requires medical attention. The United States Food and Drug Administration has not evaluated any statement, claim, or representation made on this website.